The Seven Deadly Sins Chapter 284: The Door To Hope

After the end if Mael’s Arc in chapter 283, the next chapter starts a new Arc of the Demon King. In chapter 283, we saw how Meliodas, Ban, and Wild are still figuring out a way to defeat the Demon King. Where Ban is analyzing how his power has been absorbed & on the other hand, Meliodas is just chilling.

By the end of the chapter, we saw Demon King’s appearance that indicated what we are going to see in Seven Deadly Sins Chapter 284. It is quite obvious that Meliodas, Ban, and Wild are now more prepared than their next defeat & this time it seems that they could defeat the Demon King.

By the end of Chapter 283, we saw how Meliodas, Ban, and Wild are facing the Demon King & in this Article, we are going to see our expectation for the Chapter 284.

Unlike the last 6093 battles, this time we have Meliodas, which ensure an ultimate battle with the Demon King. The best part to see in this battle how the Demon King will face against Meliodas. If we remember, the Demon King said that they can only defeat him only if they come in their true form.

As the last battle with Meliodas, he had a tough time defeating the Demon Lord & it is clear that only he has the ability to defeat the Demon King. In this chapter, we might see Meliodas using the “Full Country Technique” (But the fact is he really is not aware of that), which is the ultimate power that he had learned from the old Demon Lord.

It is really hard to say if they could finally defeat the Demon Lord in this Chapter. Do share us yours though on what you think will happen.

The Seven Deadly Sins Chapter 284 will release on 2nd September. 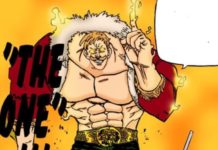