Sword Art Online SE 3 EP 3 has really created some hype & we are going to see Kirito returning after 5 month in the current world. Kikuoka on the other hand is seen involved in the experiment & kidnapping, which will get him trouble. In this episode we are finally get to know more baout Soul Tranlator.

We saw how Asuna ask Koujiro to help her enter the Ocean Turle so that she could investigate Kirito. In this episode Kikuoka will tell the truth about how Kirito’s brain was damaged & will see how they are working on healing his brain. We will also get to know about the fact how Kikuoka use Kiriko to build an advanced AI.

According to Spoiler, Kikuoka we tell everyone about the experiments done on Kirito’s character. It is also said that this episode will also show the begining of the Zakkaria Sword Arts Tournament.

SAO Season 3 Episode 3 will release on November 11 and in this episode we will get to know if Kirito’s will return in the game. If Kirito’s return it confirmed that the Season 3 will again become an interesting Seaosn. 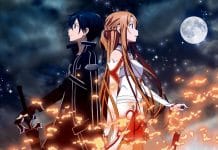