We all know that the Steins; Gate 0 will have just 24 episodes & we are just 4 episode away from ending this season. We all have been waiting for the Episode 20th, which was supposed to be to release soon, but today we got an official confirmation that the episode will be delayed.

Steins; Gate 0 Episode 20 will be aired on 29th August. Along with this, we also got to know that the next episode that is Episode 21 will also be delayed. In the last episode, we saw how Okabe’s journey has become difficult to get things back to the place they belong. On the other hand, it is also getting difficult for him to understand the messages from the past, as he wants to undo all the mistakes.

If you haven’t watched this Anime, I would personally request you to watch it. This Anime has is one of my Favorite Anime, which has the most emotional story that you will find in any Anime series. 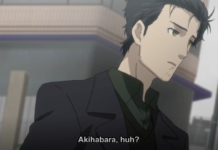