Sirius the Jaeger Episode 8: The Sanctuary of Sirius

Read About: Sirius the Jaeger Episode 9

Sirius the Jaeger episode 7 is out & this episode unfolds the story about the Arc Of Sirus. This Episode is one of the best episodes & after Sirius, the Jaeger Episode 8 things are going to be interesting.

In the previous episode (Ep 7) we got to know that Professor Willard was also involved in Dogville incident, where he wanted to know about the Arc Of Sirus & his troop were expecting something else. It also got clear that Kershner was just a puppet & the Vampires are planning something huge.

It seems that the Vampire Lord, Yevgraf is willing to desire the Ark if Sirius. In this episode, it got confirmed that Yuliy is going on his way in search of the Arc. Sirius the Jaeger Episode 8 is going to be exciting.

About Sirius the Jaeger Episode 8

The episode shows that the Arc of Sirius has some relation to some mysterious box, which is in Sakhalin kept  at the Sacred Place of Sirius. Yevgraf takes Mikhail to the Sacred Land Of the Sirius, which was occurred long ago. In this Secret Place, Yuli’s father had sealed the box having the secret about the Arc of Sirius. According to the Yevgraf, Yuli’s fatter has protected the box in the Sacred Land of the Sirus & the only one who can release the seal if one of the Sirius.

As we have expected  Yuliy went on the search for the Arc of Sirius. Yuliy, is there Sakhalin & over there he meets a Jagger commander. I seem that the Jaegers has asked an help for Yuli, so that he is not there alone.

On the other side of the story we saw how the scientist convince the Yevgraf about his research & takes a oath that he will show him the research as the best choice for his mission.

On the way to search for the Box, Yuli and the commander (It seems that commander is also a Vampire)  gets into trouble. We will see how Yuli and the old man are facing Lisa & Tamara in Episode 9. 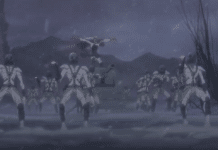