It’s just the third episode and villains are already here. My Hero Academia Season 3 Episode 3 is out now and here is my review.

My Review
Before I start with my review, let me tell you a fact about Shifuku and how he is in the team of Wild Wild Pussycat. He is the man among three superpowered women. Now the reason for that is Shifuku was a woman as well until he changed his gender. Not all anime-only fans would have to know about it, but it’s a fun fact, and now you know it.

So the episode started from where it left, heroes started to train in to develop, grow their Quirk in order to get stronger. Class B has already reached to the training camp, and now both the classes are started to train. They are doing some serious training, and by the end of the day, they get super exhausted. The first half of the episode was covering all the heroes and how they are working on their quirks to develop them. By seeing all these heroes around Kota gets very annoyed and he just ran away to his secret hideout.

Izuku is thinking about him a lot and he is thinking why he is like this, why he hates hero. Though later we get to know that Kota not only hate Heroes but he also hates villains and anyone with the quirk. He hates the entire quirk society. When Izuku knew that he was wondering what to tell him to make him feel better or just to change his perspective to see things.

At that time we also see villains making their appearance to the training camp to create the obstruction in heroes training camp. Seeing villain attacking in the third episode seems to be too early for me. I know I can expect some good action, but still, it would be better if the league of villains would have come in the next or next to next episode. A little extra time for the character development would be better is what I think.

Though I think this attack by villains is also let us see the characters using their quirk in the whole different way, maybe, I’m not sure.

The episode was a good one, and I liked what I saw. Now let’s just wait for the action in the upcoming episode. 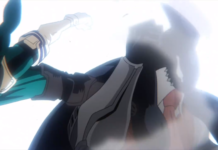