After seeing the third episode of Megalobox, I have to say that the creators are doing a fantastic job. So without wasting another second let’s get in the Megalobox episode 3 review.

After creating a fake I’d of JD, the episode started by using that fake I’d to enter in the Megalonia. Trying to expand our character through these kids, portraying the harsh life of slums. They shoed the team work of those kids, which they use to steal cameras in order to get some stimulants that will help them to ease and forget about their worries. It showed how terrible it is for our characters to live in this neighborhood.

Filled with all the details in the background the artist is doing a great job. Okay now back to the episode review, the kids that I’m talking about are the main focus of this episode, and now we also get our third main character of the series. His name is Sachio, and he is good with computer and stuff, he knows about technology. I know all of the kids are going to be the part of JD’s story, but Sachio is going to play an important role. As with his knowledge he is going to design JD’s gear for the tournament.

From the first scene in which these kids were introduced, it was clear that they know how to survive, all of them are intelligent but Sachio stands out the most. He finds interest in Megaloboxing and JD. He want’s to help Joe to reach the top, he asked Joe (JD) to take him to the tournament. After that the question arises why he wants to go to the tournament then we saw his hat and saw the picture tapped inside his hat so that no one else can see it except him. He is very defensive about his hat and from what I believe it is something related to his parents. Now I don’t know what it is and maybe Sachio don’t know it as well, and that’s why he wants to go to the Megaloboxing, to find things about his parents.

Other than that the episode revolves around the gear, and the gear was the reason JD and kids meet. They didn’t find any gear just yet but we know, Sachio is going to help in designing a new gear for JD. The episode was amazing, the hint of hip-hop and the amazing animation just made me his fan.

With a very short cast, I can say this series is my favorite series of the season. 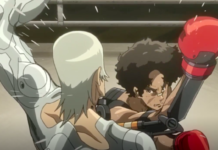 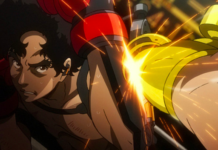