So the new season begins, and today I finally got the chance to visit the AniChart site to make a list of anime to watch this spring. There is a huge list of animes listed on their website though I only picked the title I find interesting. Once their anime is out, we could soon publish reviews. So without wasting any time let’s see the anime’s to watch this Spring 2018.

Undoubtedly, one of my favorite series to watch, Stein Gate Zero is the dark untold story of Steins;Gate that put the eccentric mad scientist Okabe in the lead, fighting to overcome from a failed endeavor at rescuing Kurisu. He decides to give up and drops his rousing scientist alter ego, in chase to forget the past.

Basically, Stein Gate Zero is a side story that portrays the events from the Beta Attractor Field’s. Which later contributes to making the end of the original story possible.

I don’t think this anime need any introduction. After Naruto ‘My Hero Academia’ becomes my favorite anime. A new movie and season 3 is about to start. The first episode of the season 6 will live after six days.

Filled with action, comedy, romance and a lot of ecchi scenes, High Scholl DxD is getting its fourth season aired this spring. TO honest I’m not a fan of the series, but one of my friends asked to watch. If you love ecchi, you would have already know about the series So, get ready for it, the first episode will air on 9th April.

I’ve already talked about this one on the blog previously. Devil’s Line is one of the hit manga that is getting its own anime series this year. The story of manga revolves around a character named Tsukasa, who is a rescued by a demon. Anzai is the name of this demon, which is more like a vampire then a demon. Anazi works for a task force that works on the cases related to the demons.Testing his rule of never drinking human blood and keeping safe Tsukasa is what story is all about. I know it’s intriguing, the first episode will release on 6th April.

Based on a manga that I’ve never read. According to the synopsi In the early twentieth century, Russo-Japanese War ex-soldier Saichi “Immortal” Sugimoto has become a miner in Hokkaido in hopes of saving the widowed wife of his now deceased comrade from the war. During his time working in search of gold, he gets to know about the hidden stash of gold. Partnering with an Ainu girl that saves him from the harsh climates of the north, they start their search, but he is not the only one looking for the hidden treasure.

Another romnce anime in the list, Tada-kun wa Koi wo Shinai portrays Mitsuyoshi Tada, a boy who has never known love, is taking photos of the cherry blossoms when there are in their full bloom state. While taking the photographs, he meets Teresa Wagner, a transfer student from Luxembourg. As she is new in the city, she got lost, separated from her travel companion. Our main lead her to his grandfather’s coffee shop. Now we have to see what’ll happen and how they are going to portray the love.

Just the wor “Box” was enough for me to pick this title. For those who don’t know, I was a boxer and Megalo Box is about boxing. According to the synopsis, JD (Junk Dog) is our main lead character. He participates in fixed boxing matches in an underground ring to make his living. Now, he again enters in the ring, but this time he encounters an opponent with some grudges. JD wants to fight this fight in his own way rather than what is fixed by his managers. 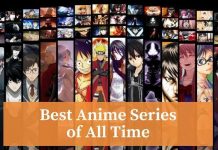