I’ve been going through my twitter feed and just saw a really nice reference that is posted on the Funimation twitter page. So basically Funimation just posted a side by side comparison photo of Eraserhead from My Hero Academia and Jessica from the Marvel series Jessica Jones. You can see the post below. 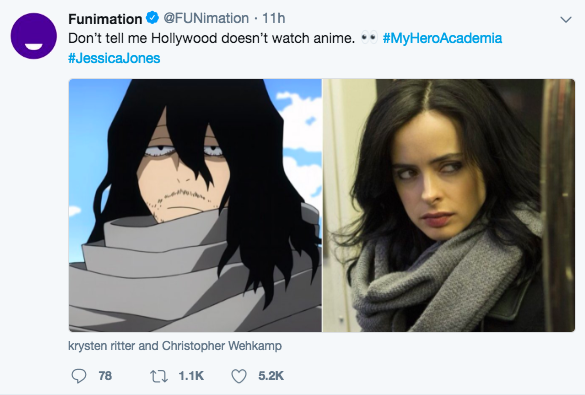 As we can see both Eraserhead and Jessica seems to dress up in the same way. It’s like Jessica’s look is inspired by Eraserhead a character from one of the best anime series ‘My Hero Academia.’

Jessica Jones is a Marvel series with two seasons already available on the Netflix. Jessica is a P.I. with super strength, she is the part of Defenders (Small-scale Avengers). Jessica is my favorite and just like My Hero Academia, Jessica Jones is one of the best show to watch on Netflix.

Season three of My Hero Academia is still running and aired every Saturday.