Welcome everyone I hope all of you are having a great day today because today is the day Gintama has returned with his new season. From the past 4 years, I’m super into Gintama. Season 6 episode 1 is just aired today and while watching I just can’t stop laughing. Classifying it into a single genre of comedy, action or parody is not easy. For all who don’t know what Gintama is, here let me enlighten you before we move ahead.

Gintama is an anime series based on Shounen Jump ongoing Manga by Mangaka “Hideaki Sorachi”. Mainly comedy with an ample amount of action and parody episodes and even revelation from real Japanese history. Gintama is a unique anime series that have my heart since I first watched it.

Gintama is an anime based on great humor, but it can be only enjoyed completely by the person who knows a lot about anime, Japanese culture, movies and knows how to laugh out loud. No without wasting another second let’s just start with Gintama Season 6 Episode 1 Review.

For starting few seconds I was a little bit confused as the intro voice was saying something like “There was a time when this city was known as The Land of Samurai” but the world has entered the great Pirates era”. Pitare, Gintama I was getting confused when we see our Hero eating a familiar fruit and isn’t it like One Piece? That’s not it after that we see Kagura as a stranger with seven balls and looking for a dragon. And that’s when I realize that this is Gintama. Watching them adding all these in the intro of Gintama is pretty fun. But that’s not it, for the fans of Naruto, HunterXHunter and Boku no Hero Academia fan our hero and Kagura went to give Chunion Hunter Hero Exam.

I know this may sound confusing but once you watch the episode you would understand what I’m talking about and you will probably end up laughing and crying with the laughter, Just like me. The intro scene was just amazing and just when it was about to over we see our Hero breaking the fourth wall and who doesn’t love characters breaking the fourth wall? This is what Gintama always do making a unique but the funniest intro when it is coming back after a while.

From my understanding this arc or this season we are going to see the real Ginatam and this arc is probably going to be a comedy. The last two arcs were pretty serious but this arc, just from the start you can’t stop laughing. And for the facts, this arc is known as “Slip Arc” maybe because this arc is slipped from the continuation and left the serious stuff behind.

Now if you have a little sister or a daughter who is growing big and it’s time for her to get into love and relationship stuff. You would completely related course;f from this episode. Overprotective dad is what we saw in this episode.

Now, if you know Gintama and if you know about Kagura try to imagine her saying yes to a guy who asks her out. I know it’s hard but it would be interesting to watch. Well if you couldn’t imagine this don’t waste your time because that’s what exactly happened in this episode. Kagura found a boyfriend and when she tells this to Gintoki and Umibozu they both get into the overprotective zone and didn’t allow it. But none of them said anything to Kagura instead fight each other, they were confused as they didn’t know how to handle it. Though they are worried about Kagura too, growing too fast and to make sure she didn’t get into any trouble situation and that leads to too many funny situations.

One of this situation is when they decided to act as grown-ups so that they won’t embarrass Kagura. They both took the grown-ups part too far and decided to Grow-up physically, and they looked like giants. They were waiting for Kagura and her boyfriend so that they can talk to this new guy and maybe sacred him off to protect Kagura from their mental fear. They both look massive and when Shinpachi enters the room and told them that they look scary and will probably sacred off Kagura’s boyfriend.

The context of the episode was funny and to be honest it was perfect. In the end of the episode, they use a reference form “Attack on titans” and that was funny too. I was pausing and laughing my heart out during the whole episode and probably that’s what you people are doing while watching it.

The opening song is very nice and that’s nothing new with Gintama, while the ending song was the one which suited the episode or you may say the arc. 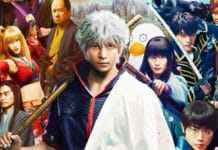