After Every Chapter release, Eden’s Zero is getting better & Chapter 19 gave a hint on another suspense & Homura’s introduction. In the last, chapter we saw Rebecca and other already reached the Guilst planet and saw that the planet is really dangerous. We saw skeletons hanging around along with scraps all over the place.

Now, talking about the real discussion about this chapter, it is Homura & she has an Ether Gear too. Looking at her it is quite evident that she is one of Devil King’s ex-member. There is a huge potential of her to be Eden’s Zero new crew member.

So Who Is Homura?

Homura is surely one of Eden’s Zero crew member from the Devil’s King time but has lost her memory. With young Weisz statement, it becomes clear that she already know about the ship and her aim is to meet Demon Lord.

Earlier to Miss Witch’s statement, this ship could run successfully if it has the other members. She talked about Sister who has the ability to heal as repair the ship, Valkyrie is Eden’s Sword and Hermit is Eden’s heart. This confirms that Homura is one of them.

To repair the ship we have Weisz as of now, but we don’t have the sword and Hear of the ship. Looking at Homura’s character we believe she is Hermit, Eden’s Heart. We believe with his Either Gear she will be able to run the ship & get it to his full strength.

In Eden’s Zero Chapter 20 we will get to know more about Homura secret and will also see how Shiki and other will reach the Guilts Planet. Whereas release date is a concern we will see the chapter to air on 14th November 2018 next week. 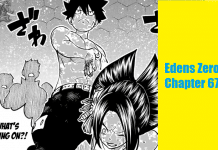