In the last chapter, we saw a perfect combination of Science and Power & it was amazing to see Tsukasa & Senku taking Hyouga. It was clear that Hyouga have an evil way to get peace in this world.

Talking about the last chapter it was clear that either Tsukasa & Senku could defeat Hyouga alone. Seeing both of them getting beaten was unexpected, but later it turned out to be their plan. The purpose of getting beaten was to get close to Hyouga so that they can defeat him with the high voltage current. This is why I said, it was the best combination of Science & Power.

In this article, we are going to discuss Dr. Stone chapter 82 spoiler. This spoiler is not complete as we have got our hand on just a few parts of this chapter.

Hyouga is not an easy opponent to get down so easily, but getting 100,000 volts shock will get him unconscious for some time. His subconsciousness will give Tsukasa & Senku some time to execute their next move. With this attack, all 3 of them are now in the equal state & all three of them need some time to recover.

In this chapter, we are also going to see “Yo’s” presence & also expected to get equal reinforcement on both the side. It was not properly declared if the reinforcement will arrive at the same time.

In this chapter, we are finally going to see an epic battle between Senku’s & Hyouga’s team. This chapter will give a hint for the final outcome of this battle & we will see either Hyouga defeated or retreating for survival. To know that we will have to wait for chapter 83 to release.

If you want an early access to this chapter, then you can check the RAW version on 10 November. Whereas. the English version of this chapter will release on 12 November. 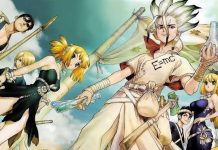