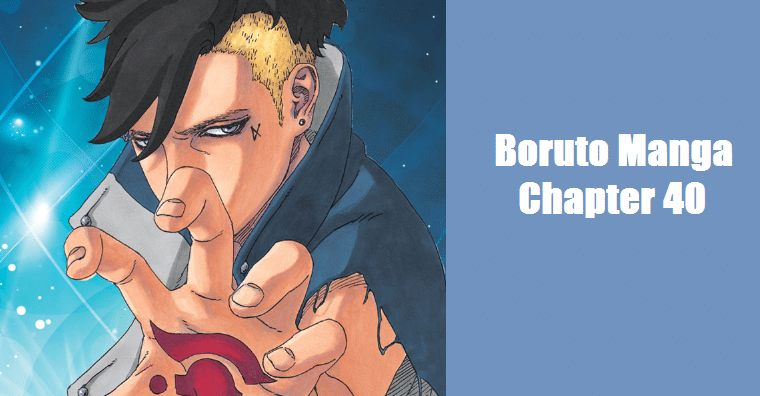 I feel good to see action and Boruto Chapter 40 is full of it. In Boruto Chapter 39 we saw how Shikamaru suspects Kawaki to be linked with Lord 7th disobedience. Also, one thing is clear that Shikamaru is not aware of Sasuke’s appearance in the leaf village. Apart from that Kawaki has started to understand Karma. He, in fact, is able to use all the Jutsu that Jigen uses. As Boruto Manga Chapter 40 is yet to come, here we are with our expected spoiler and let you know the release date.

As soon as Kawaki along with Boruto and others entered the Space-Time Nin Jutsu to save lord 7th. As they entered the Space-Time, we were quite sure that we might get someone else there & that is Boro. According to Kawaki, Boro is more powerful than Jigen, which means they will have to fight hard.

At the same we also think about will the chapter 40 will just show Kawaki and other fighting Boro? Or will we get o know more about what is happening at Jigen’s hideout and Leaf village?

I believe that we might get to see it all. But what interests me to see is how Boruto and Kawaki will use their Karma and understand it well to fight Boro. At the same time, Mitsuki being with them makes us feel that he will give an upper hand to the fight. Also, will Sarada being there we might also see the magic of Sharingan.

So, we are quite excited to see how Boruto and Kawaki defeat Boro. Also, will they succeed in rescuing Lord 7th? All will be cleared once the chapter is released. Not only that but after Naruto is back, we will also get to know if Kawaki is really a spy.

Not only that, we might also get to see Boruto’s Karma power in this chapter. Along with that we may see how is Boruto and Kawaki’s Karma is connected. On one of the discussion on reddit, a fan mentioned how people are talking about Jigen’s death. But will that really happen this soon? We don’t think so. Or can we see these generations Sage in action? WHo know!

So what do you think about Boruto Chapter 40? DO let us know in the comment below.

Boruto Manga Chapter 40 will release on 20th Nov 2019. This is an official announcement and there is no delay as of now. The Raw scan will release a few days early that is around 18th or 19th Nov. So stay tuned to see more.

What The Critics Have To Say?