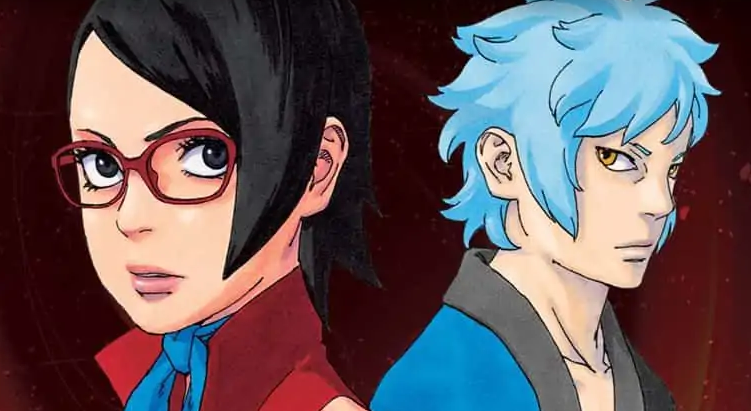 It looks like what we predicted in Boruto Chapter 40, has come true. I have to admit that Boro is quite powerful & the Dark Mist Jutsu of his is still mystories. So, how will they get rid of that Jutsu will only be known in Boruto Chapter 41. Apart from that, Sarada did a smart work by evacuating everyone from there.

Not only that, Sasuke is really in bad shape there. Shikamaru can only rescue everyone only using Sasuke’s Space-time jutsu. But it looks like he might take a while. So, there is a lot to discuss on what is going to happen in Boruto Manga Chapter 41. Do let us know what you think will happen & join our Boruto Chapter 40 Discussion.

In this chapter, we are going to see more of teamwork. Sarada has developed a fully matured Sharingan & she is now able to read Boro’s movement. The plan will be lead by Sarada & we will see some amazing teamwork.

Yet, they will not be able to defeat Boro, but will make him step back. At the same time, we will also see some backup reaching them.

If we check what happen in the last chapter is that everyone together could not beat Boro, but gave tough competition. Also, the Team 7 and Kawaki are still on the upper hand that Boro. At the same time, Boro has Naruto (7th Hokage) which also gives him the upper hand. Which means both are equal.

Above all, we also got to know that Boruto is Momoshiki’s Vessel; that’s the reason why he has the Karma. Also, Boro’s plan is to capture Kawaki as well as Boruto. This brings us to think that we might see Momoshiki later in Boruto.

Sarada seems to be observing Boro’s moment when everyone was rushing on him. As per the last part of the previous chapter, it is obvious that Sarada has some plan & this time they are going to counter attach Boro as well as rescue the 7th.

Even after rescuing the 7th, undoing the seal is still a challenge. The only one to do that is Kawaki. This also makes sure that even the upcoming Boruto Manga will be an action manga. So, share your thought on how will Kawaki undo the sealing jutsu.

Unlike Boruto Episode 133, the Manga chapter is not delayed. It has been officially announced that Boruto Chapter 40 is getting released on 20 December 2019.