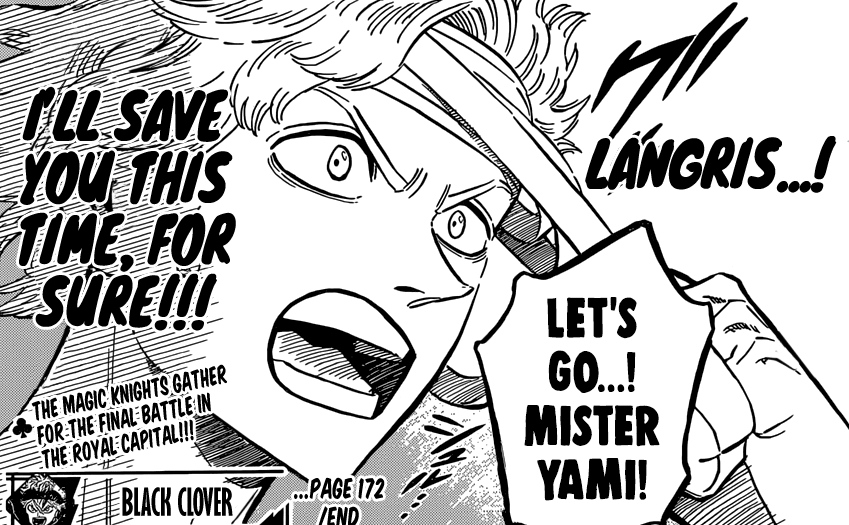 Black Clover Chapter 173:  The Magic Knight Gathers For The Final Battle In The Royal Capital

Black clover Chapter 172 is out & watching Fuegaleon using Salamander power was one of the epic scenes from this chapter. In the episode, we saw how Fuegaleon defeats Randell with his new power & we also saw a glimpse of Fana past. As expected there was a small hint Fuegaleon gave about Aasta in this chapter.

One of the most surprising parts of this chapter was to see Elf’s gathering to destroy the kingdom with full force. Reding this chapter also reveals Langris Vaude Elf who is commanding the others. On the other hand, we also how Yami wakes Finral to defeat the Elfs.

You Will Also Like: Super Dragon Ball Heroes Episode 4

The upcoming Black Clover Chapter 173 is going to be the start of the most intense battle of the Black Clover Manga series. So let’s find out what can we see in chapter 173.

In this chapter, we are going see an amazing battle between the Elf’s & the Black Clover Kingdom Magicians. As seen how Yami wakes up Finral & both of them are moving towards Royal Capital. We also saw that Fuegaleon has already sensed non-human magic appearing from the Royal Capital.

This is a clear indication of seeing Clover Kingdom magicians to face the Elf in this episode. We already know that Aasta and other are already there in the Capital which means that we are finally going to see them in Chapter 173. We are not sure in what state we will see them, but it is sure that they will be fighting some other Elf.

This Chapter will be more focused on the Golden Dawn, which is the reason why the Elf’s are here. We will be seeing how the Black Clover Magicians will fight against these Elfs saving the kingdom and the human race.

Talking about Finral, we believe that he will be playing a major role to fight against his brother Elf. Whereas Yami is a concern, he is always the badass character of this series surpassing his limits. We have also seen Fuegaleon talking about William which means we will be seeing him in the chapter too. With so many strong characters fighting these elf’s make this chapter the most epic chapter of Black Clover Manga series.