If you haven’t watched Bakumatsu series, then it’s time to start. The first Episode of Bakumatsu was released today & it was quite interesting on how Kogorou Katsura & Shinsaku Takasugi travel through time.

In the first episode we see how Kogorou & Shinsaku visit Nijo Castle for the hunt of the treasure, but accidently with some magic power they went to the future. In the future they witness the change in the era. It becomes clear that they are all for the Legendary treasure.

It becomes clear that the treasure that they have stolen had the power to leap through time. Now their mission is to find all the great warlords in the history who have forgotten Japan over the century & bringing the most powerful ones to their time period.

By the end of the chapter we see, Shinsaku, who meets Sanada Yukimura one of the twelve commondor of Susanoo. Now, let’s find out what we can expect in the 2nd Episode.

After watching Bakumatsu Episode 2 preview, we get to know that Sanada Yukimura was a retainer of Toyotomi Hideyoshi & one of the strongest commander from Sengoku’s period. The 2nd Episode is titled “Kill, Takasugi, for love!” which means that we could see Shinaku in trouble.

We also see a character having the legendary treasure, the watch that has the power to leap through time. We believe that’s the Susanoo. It will be unfair to predict anything after watching the 1st Episode. We are sure that the future episode will be more interesting.

According to the official confirmation Bakumatsu Episodes will release on every Friday, which means that this episode is expected to be released on 12 October next week. If there is any change in the schedule, we might update you here. 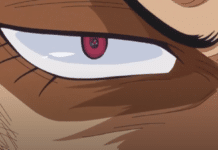