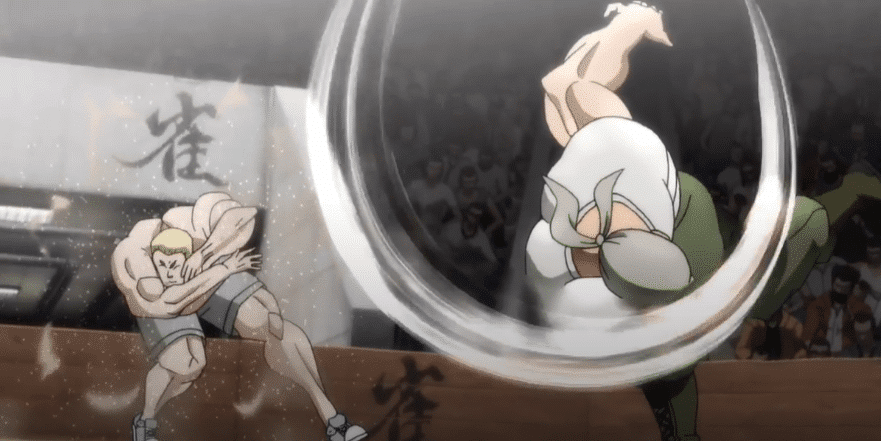 By the end of Back Episode 22, it got clear that Sikorsky will have to face Gaia & he seems a strong opponent. With the initial attacks, Gaia made it clear that he will be using the sand to attack. Now talking about Gaia Martial Art technique, it is something done using the environment.  In Baki (2018) Episode 23 we are going to explore Gaia style.

This also makes it clear that Baki Episode 23 is going to be about Sikorsky V/S Gaia. For those who want to know about Baki Episode 23, can keep reading this article and rest can follow other content.

As the fight starts by Gaia throwing Sand towards Sikorsky & uses broken teeth as a weapon against him. This also brings us to notice that In Episode 23 we will be seeing his ultimate form.

In Baki Episode 23 we will see how Gaia attacks Sikorsky with sand mixed with broken teeth. We will see his continuous attack on Sikorsky until his next move. His next move will be his camouflage technique. To execute this technique he will use sand as a weapon, where he makes the whole place dusty to hind himself.

With his fast move and this camouflage technique, Sikorsky is not able to fight. With this technique, Gaia will smash Sikorsky until he gives up on the fight. We will be seeing him giving up after getting brutally beaten by Gaia.

Apart from this fight, we might also get to see Ryuukou Yanag & Shibukawa by the end of the episode. This episode will particularly focus on Sikorsky v/s Gaia & by the end a new Battle between Ryuukou & Motpbeizo.

If you are reading this article, then it is quite sure that you are looking for the release date too. Baki Episode 23 will release on 26th November 2018 on their official timing. To know more about this episode feel free to contact us in the comment below.