Update: The English Sub-episode is out. Enjoy watching it in Anime Streaming sites.

Baki (2018) Episode 14 is out & we saw some kickass fights in this episode. Seeing Baki’s father, (Yujiro Hanma) in this episode was a surprise for us. We saw how he comes to talk to him to rescue his son’s girlfriend, but it seems that he wanted something else.

It was also unexpected to see Olivia appear in the episode & also being  Yujiro’s friend. This Russian get in a fight with Olivia, but Baki’s appearance changes the situation. Baki’s seeing her girlfriend half naked makes him furious & attacks the kidnapper.  Somehow the Kidnapper escapes, but Baki finds him on his hideout.

It seems that Baki’s attack did not affect him, but then comes Olivia again. It seems that Olivia was there to capture the Russian Kidnaper. During their compact, we see how powerful Olivia is & with just one punch he kills the Kidnapper throwing him out of the window.

Our Expectation from Baki Episode 15:

Baki is all shocked to see such a powerful man standing beside him. We believe that there is a great story narrated for the future episode. We are expecting to know a lot more about Olivia’s & Yujiro story.

Some say that Baki will be asking Olivia to fight him so that he can try his luck by fighting Chainless. But, there is no confirmation if that will really happen. We will have to wait until we see the episode.

Baki 2018 Episode 15 will be released on their regular time & schedule. We are expecting to see Baki to release on 30 September in Japanese & then in Dub a few hours later. If you have anything to share or talk to us about his series, feel to share it in the comment below. 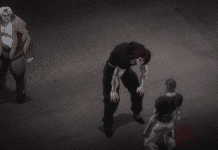