Attack on Titan Episode 49: Night of the Battle to Retake the Wall”

Attack on Titans is getting excited after every episode & episode 49 is no less. Talking about the last episode, they showed about Historia’s coronation which has been settled nicely. We saw how Historia spends her time with the orphanage and looking after them. On the other hand, Humanity’s Force has strengthned after she was out of the Military.

We also saw how they manage to find Glowinh Ore from Ress, which gave them an additional benefit. Eren on the other hand has improved his Titans ability so that he could use his titan hardebining ability when needed. Hang has also been workinh secretly on a wepons to fight againts Titans.

Talking about Eren’s dream, the last episode made it clear that he was dreaming about Keith Sadies and we might see more about it in the futire episode.

Attack on Titan episode 49 will be focused on Scouts and his plan. It is made clear that Scout will be retaking the wall and as the title suggests, “Night of the Battle to Retake the Wall” clearly indicated about Scout.

We might also get to know more Scout’s plan in this episode. Talking about the release date, this episode will release today on their official timing. It will really be interesting to see Scouts battel. 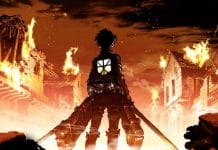