Angolmois: Genkou Kassenki is getting quite interesting now. Talking about the last episode, almost everyone in the Tsushima battle died. Jinzaburo getting drowned in the water felt like the end of his role, but some magic power comes to save him. It’s like, a movie without a hero.

There were a lot of unexpected surprises in the last episode. Kano trying to kill the princess was unexpected, but later we get to know that, it was her plan to make the princess unconscious so that she could hide her safe.

One of the best parts of this episode was the fight between Jinzaburo & the Mogol commander who killed Onitakemaru. Jinzaburo defeats him by granting his life. By the end, we get to know that Mogol’s are planning to attack Kyushu Island. In this Article, we are going to see about what’s next in Angolmois: Genkou Kassenki Episode 12.

The Princess meets Jinzaburo again & we get to see that Jinzaboro is all set to battle the Mogols with all the army left. Being said that Mogol is heading towards Kyushu Island, Episode 13 will be the beginning of the Kyushu Arc.

There is no doubt that Kyushu will have his own Army base & Jinzaboro is now already aware of Mogol’s Army strength & strategy. There is no detail about what we can expect in the Island but it is sure that Jinzaboro & other will be visiting there before the Mogols.

After Episode 12, wait for the next episode seems interesting. We are going to witness the Kyushu Arch on 3rd October on their official timing. 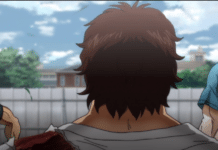