Well, the episode was started with the Kondo’s son standing out of the restaurant. He came here with his new pet hamster which he wanted to show his dad. Akira was the first person to greet him, and right at that moment I sort of understand what to expect from the episode.

Akira gets to see Kondo’s house in this episode as he went with Kondo’s son to his house. Going into Kondo’s house kind of set them of Akira getting inside Kondo. She is taking a step ahead to know him better. There is a scene, best scene of the episode from my point of view, where Akira was peeping to a room out of curiosity through a small gap between the doors. That scene set the them where Akira peeping inside Kondo’s life just to know him more.

Today’s episode was more on the funny side, As when Akira and Yuno (Kondo’s son) reached home Kondo was not there. After some time by hearing the footsteps of his dad, Yuno suggests to give him a surprise by hiding Akira. She was hidden in the closet and can hear everything. It was hot and humid inside the closet, and she fainted after some time and in attempt to give her some justice to Akira, Yuno accidentally spills it all over Akira. Her shirt was stained and Kondo takes it out for the Laundry shop while she was wearing Kondo’s t-shirt.

In the second half of the episode, Akira and all the staff members were excited to hear about the hamster from Kondo. They all are trying to express their joy by giving advice and pieces of waste vegetables. In all that Akira didn’t get the chance to talk to Kondo, she had a letter in her hand, but she didn’t get the chance to give it to Kondo. There was a scene when every one of the staff was in the office with Kondo and talking about the Hamster. No one at work and Akira was the only one here. So she went to the office, and she snapped and ordered everyone to get back to their work. For a moment she acted like Kondo’s wife.

The episode was pretty fun and I enjoyed it. 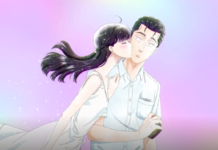 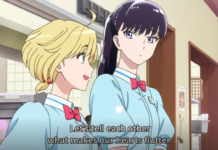